A SCORE BASED ON A BABY'S HEARTBEAT 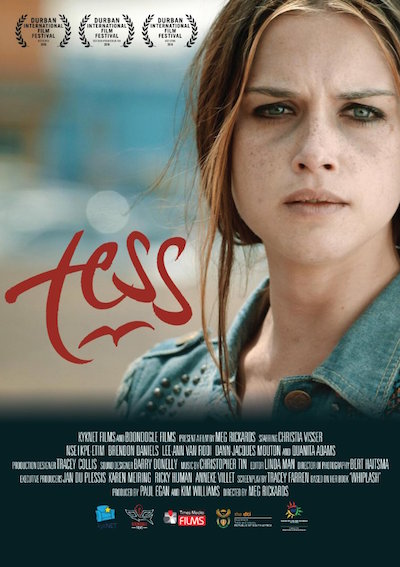 A Study in Grime

Meg Rickards' award-winning film 'Tess' is a gritty account of a Cape Town sex worker who suddenly finds herself pregnant, and rather than aborting, fights through addiction, rape, and her own history of being sexually abused, to have the child. It's a graphic and unflinching look at the underbelly of South African life, as emotionally punishing as it is ultimately empowering.

The Music of Dying Inside

Christopher's score is largely ambient and atmospheric, with snippets of South African instrumentation--a kalimba here, an electric guitar there--wafting in and out in a surreal fog of sound.

The climax of the film is when pregnant Tess gets sadistically beaten and raped by a john. The audience is unsure whether she lost the baby or not, until she's taken to a hospital and given an ultrasound, and we can hear, for the first time, the baby's heartbeat.

Christopher took the audio for that scene, slowed it down, and filtered it; then he used it as a rhythmic device throughout the score. In all the intense moments, where Tess is in danger, a low throbbing sound can be heard. This throbbing became more and more pronounced and recognizable through the course of the film, until the climactic rape scene, where the melodic elements of the score were gradually stripped away until all that was left was the low thumping of blood flow. Then in the next scene, when the viewer hears the ultrasound of the baby's heartbeat, they realize that throughout the film they had actually been listening to the baby's heartbeat all along.

Christopher is best known for his collaborations with South African musicians like the Soweto Gospel Choir, but his connections with the country actually started through working with Meg Rickards and scoring her films. They were both students in London in 1999--Meg at the London International Film School, Christopher at the Royal College of Music. Christopher scored her first film--called A-Zu-Re, about street life in the townships--in collaboration with the South African hip hop group Brassie Vanne Kaap. They've been friends ever since.